The Postmistress by Alison Stuart 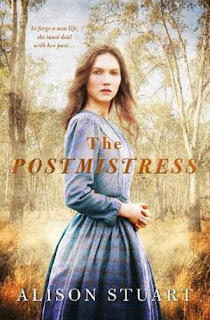 I have been aware of Melbourne author Alison Stuart for many, many years. In fact, thanks to my trusty reading spreadsheet I know that I acquired two of her earliest books and had them signed in 2009. Now, as I mentioned earlier this week, having a signed copy of a book is no guarantee that I have actually read it. Since then I have intended to read several of her books, including her mysteries set in 1910 colonial Singapore that are published under the name A M Stuart

Fast forward to 2020 and I finally, finally read a book by Alison Stuart (not one of the signed ones). And it was really enjoyable!! I read it because I was approved to read her upcoming book The Goldminer's Sister which features common characters with this book so I wanted to read this one first. Whatever incentive works right?

Adelaide is the young daughter of an English shipping magnate, who, upon having her heart broken, feels that she has no option but to run away to a new life. Fast forward ten years and Adelaide is now well established as the postmistress in the small gold mining town of Maiden's Creek, with her son Danny and her former maidservant, Netty. As far as the town is concerned, Adelaide is a respectable widow who performs the vital task of keeping the isolated town in contact with the outside world. She does, however, have a tendency to skirt the bounds of propriety in the eyes of the decent women of the town by doing things like trying to teach the "dancers" at the local hotel how  to read.

When American Caleb Hunt arrives in town, he too is not quite what he presents himself. A veteran of the American Civil War, he wants to come and find the mining claim that he acquired in a gambling game. What he doesn't have is a lot of experience in gold mining or any equipment after he was double crossed. After he is injured in an incident involving a horse, Adelaide takes him in while he recovers. There is a growing attraction between them, but is there any kind of future when Caleb can't shake his demons or acknowledge what he is trained to be, let alone when Adelaide's past comes back to haunt her.

I really enjoyed the secondary characters in the book, and can see how there are plenty of future stories to be told set in Maiden's Creek. I loved the setting and I enjoyed the towns people. There were a variety of interesting characters from the local "ladies" to the old doctor who is rarely sober but still manages to care for the town, the coach driver who is courting Netty, and frankly has been for quite some time and others.

The author managed to include many issues that would have been associated with life in the bush in the early days of settlement. Things like bushfires, accidents and mining incidents are hard to deal with now with all of our modern communication and technology let alone in the 1870's. I have to say, there were a couple of issues portrayed which felt very, very relevant to 2020 so far.

The area that Maiden's Creek is set in is not an area that I am particularly familiar with but it is an area that I have wanted to visit for a while now, and that desire has increased since reading this book. I did love that we first met Caleb in Williamstown which is a suburb of Melbourne that I have spent a fair amount of time in. As I was reading the small part of the book set there I could see what it might have looked like (obviously minus the cars and lighting that I am used to seeing).

I am very much looking forward to reading more from this author! And no, I am not going to wait another 10 years to do so.

A stunning historical tale of loss, desire and courage that is full of the terror and the beauty of the Australian bush, for readers of The Thorn Birds, The Naturalist's Daughter and The Widow of Ballarat.
To forge a new life she must first deal with her past...
1871. Adelaide Greaves and her young son have found sanctuary in the Australian town of Maiden's Creek, where she works as a postmistress. The rough Victorian goldmining settlement is a hard place for a woman - especially as the other women in town don't know what to make of her - but through force of will and sheer necessity, Adelaide carves out a role.
But her past is coming to find her, and the embittered and scarred Confederate soldier Caleb Hunt, in town in search of gold and not without a dark past of his own, might be the only one who can help. Can Adelaide trust him? Can she trust anyone?
When death and danger threaten - some from her past, some borne of the Australian bush - she must swallow her pride and turn to Caleb to join her in the fight, a fight she is determined to win...